The Purple Rose of Cairo1985 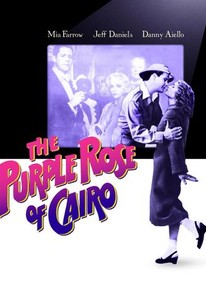 Critics Consensus: Lighthearted and sweet, The Purple Rose of Cairo stands as one of Woody Allen's more inventive -- and enchantingly whimsical -- pictures.

Critic Consensus: Lighthearted and sweet, The Purple Rose of Cairo stands as one of Woody Allen's more inventive -- and enchantingly whimsical -- pictures.

The Purple Rose of Cairo Photos

Woody Allen blurs the the boundaries between the real and unreal in this unique comic fantasy. The scene is a small town in the mid-1930s. Trapped in a dead-end job and an abusive marriage, Cecelia (Mia Farrow) regularly seeks refuge in the local movie house. She becomes so enraptured by the latest attraction, an RKO screwball comedy called The Purple Rose of Cairo, that she returns to the theatre day after day. During one of these visits, the film's main character Tom Baxter (Jeff Daniels), pauses in his dialogue, turns towards the audience, and says to Cecelia, "My God, how you must love this picture." Then he climbs out of the movie, much to the consternation of the rest of the audience and the other characters on screen. Liberated from his customary black-and-white environs, he accompanies Cecelia on a tour of the town, eventually falling in love with her. Meanwhile, the other Purple Rose characters, unable to proceed with the film, carry on a discussion with themselves. Desperately, the RKO executives seek out Gil Shepherd, the actor who played the hero of Purple Rose. Shepherd (also played by Daniels), is sent to Cecelia's hometown to see if he can repair the damage.

Zoe Caldwell
as The Countess

Michael Tucker (I)
as Gil's Agent

Peter McRobbie
as The Communist

News & Interviews for The Purple Rose of Cairo

View All The Purple Rose of Cairo News

Critic Reviews for The Purple Rose of Cairo

Everything in this movie makes heavenly sense.

Delightful from beginning to end, not only because of the clarity and charm with which Daniels and Farrow explore the problems of their characters, but also because the movie is so intelligent.

It's a sweet, lyrically funny, multi- layered work that again demonstrates that Woody Allen is our premier film maker who, standing something over 5 feet tall in his sneakers, towers above all others.

...one of the most entertaining movies about movies ever made.

The Purple Rose of Cairo, Woody Allen's latest, is the slight but charming story of what happens when Cinderella's Prince steps out of the fairy tale and comes to New Jersey for a taste of Reality.

It is one of Allen's deepest reflections on the seventh art and its function as an escape from our harsh reality. [Full review in Spanish]

When discussing Woody Allen masterpieces, titles like Annie Hall and Hannah and Her Sisters are frequently cited (and rightly so), but where's the love for The Purple Rose of Cairo, a movie that even Woody himself considers among his top two or three?

In NJ, anything can happen!

Woody Allen's bittersweet comedy about the magical allure of movies in the Depression era was nominated for Original Screenplay Oscar, but it's premise is smiliar to that of Buster Keaton's 1924 silent.

Rich Cline
Shadows on the Wall
View All Critic Reviews (38)

Audience Reviews for The Purple Rose of Cairo

Classic and classy Woody Allen. Tom Baxter, an adventurous movie character steps off the screen to woo Cecilia, a starry-eyed, Depression-era waitress and cinephile, but the character's portrayer, Gil Shepherd, a smooth, somewhat megalomaniacal rising star, is called in to counter-woo Cecilia so that the show can go on. Woody's escapist fantasia is blissful yet tragic, blurring the lines between reality and make-believe, the haves and the have-nots, and love and truth. It was nice to see young, wispy Dianne Wiest and bug-eyed Glenne Headley as slinky prostitutes. After watching so much cantankerous old Jeff Daniels on "The Newsroom," bright-eyed bushy-tailed young Jeff Daniels is a remarkable palate cleanser, with a great singing voice to boot! Mia Farrow is, of course, charismatic and vibrant with her delicate voice and damselly beauty. The last scene of her, dejected by the wretched realities of her life yet still utterly captivated by Fred Astaire and Ginger Rogers in "Top Hat," is just the most indelible final image in Woody's canon.

"I just met a wonderful new man. He's fictional but you can't have everything." In 1930s New Jersey, a movie character walks off the screen and into the real world.

REVIEW
There's no way you can't like the ingenuity of the movie, and the fun it has. It's about the joy of life, and love of the movies, and the difficulty to tell the difference sometimes (at least when in the theater). In some ways this is one of Woody Allen's lightest movies, and certainly lightweight compared to the more serious movies of this period (like the stunning gem, "Another Woman"). It's not zany like his earliest comedies ("Love and Death"). And it's not deeply observant and sometimes downright moving and brilliant like his best movies (like "Annie Hall" or "Crimes and Misdemeanors"). In that way it feels like what some novelists would call an "entertainment" to distinguish from their heavier masterpieces, and sometimes these are the most readable of all. Or the most watchable. "The Purple Rose of Cairo" is inventive, warm, and touching. It's really high brow hilarious when the people on the screen react to the situation, not only because of the existential reality shift going on, but because they are all high brow types. Then there are the everyday scenes with Mia Farrow, the lead actress in the real world (usually), and support from Danny Aiello, really just a foil for the main romances (two) going on with Farrow (singular). It's not as complicated as it sounds, which might prove the elegance of Allen's writing. A beautiful, delicate movie without undo weightiness. Joyous, yes, even in its melancholy end.

One Allen film w/o himself or one of his numerous doppelgangers, which is a clue that here is a subject that is finally larger than Allen: his love of movies, that he freely shares with movie fans everywhere. So he takes one of the movie fan's most cherished desire (" ... I wish I could be there ... or that here was like there ...") and plays with it a little. Mia Farrow plays us, the fan, is our doppelganger, and the movies are a) better than real life, and b) but not real life. One of the better Allen films, Farrow's contented gazing at the screen too brief to be iconic, but it should be ...

Funny, charming and lighter than air, The Purple Rose of Cairo is the quintessential Woody Allen comedy. As per usual, the cast is a delight: a perfectly cast Mia Farrow, Jeff Daniels and Danny Aiello. The visuals and the music are enchanting; the ending, perfect. I actually preferred the similar Midnight in Paris but I thoroughly enjoyed Purple Rose as well.

The Purple Rose of Cairo Quotes