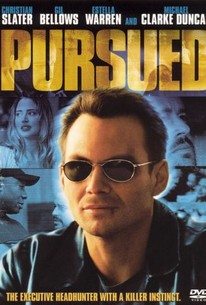 In this thriller, Ben Keats (Gil Bellows) is a top executive at a leading information technology firm. Ben is happy with his job and doesn't want to leave, but that isn't about to stop Vincent Palmer (Christian Slater) from trying to lure him away. Vincent is a head-hunter who recruits personnel for leading companies and earns a seven-figure salary for getting whoever his clients want, no matter what it takes. Vincent starts with the traditional offers of more money, more power, and better perks, but when Ben refuses to be swayed, Vince starts playing hardball with his tactics escalating into violence and death threats against Ben's family. Will Ben fight fire with fire or will he be forced to do Vincent's bidding? Pursued also stars Michael Clarke Duncan, Conchita Campbell, and Estella Warren.

There are no critic reviews yet for Pursued. Keep checking Rotten Tomatoes for updates!

There are no featured audience reviews yet. Click the link below to see what others say about Pursued!