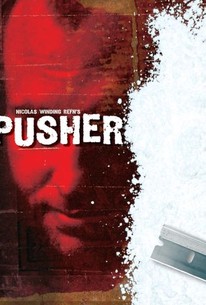 Frank is a small-time pusher who sells heroin together with his friend Tony. The heroin is supplied by an ex-Yugoslav dealer, Milo, and safely kept at his hooker girlfriend Vic's apartment. When a heroin deal goes wrong and Frank is busted by the police, he is released because of a lack of evidence, but only to find that he owes a very big debt to Milo who has given him two days to collect the money that will save him from a 9mm bullet.

Alex Nielsen
as Man in Car

Per Leth
as Bodybuilder

Jesper Staal
as Bodybuilder
View All

The film practically vibrates with youthful aggression, sly humor and gathering tension, hurling itself forward like a junkie toward the next fix.

Full of resonant themes not simply confined to the crime/drug world.

The kind of stuff Miramax used to pump into the Angelika like Fruitopia.

Outstandingly well-done for a first-time director with no formal training on a shoestring budget, but something about it is unappealingly typical.

First in a series of 3 films about Copenhagen drug dealers. Sardonic comedy in the "Goodfellas" vein.

The biggest surprise is how you give a damn about what happens to Refn's bad guy--a testament to Bodnia's native likeability.

...like a Copenhagen cinema verité edition of Mean Streets

The best asset of the film is Kim Bodnia

The director has cooked up a very disturbing film, that is derivative of Pulp Fiction.

At 26 years of age Nicolas Winding Refn made his feature length debut with Pusher, a flawless piece of filmmaker that ranks among his very best films. I would put this film ahead of Drive and Bronson, and here is the work of a director who has a take no prisoners approach to making films and crafts one of the most stunning crime dramas that I have seen in quite some time. He would later follow up this film with two more sequels, all terrific, and with a great story, exceptional acting, and pulse pounding, raw intensity, Pusher is a superb film that is very impressive considering the fact that that Refn made this in his twenties. Pusher is highly engaging from start to finish and is a memorable crime drama that will stay with you long after you've seen it. Refn has an eye for what makes a good crime film, and with Pusher he would prove himself as a talented filmmakers with many other films. Pusher is a standout debut, and it's one of the most impressive film debuts I've seen since Quentin Tarantino's Reservoir Dogs. Brilliantly effective, raw, gritty filmmaking, Pusher is an accomplished picture that tells an engrossing story. Refn doesn't overdo the subject, which in turn makes the film much better, simple ideas make for great cinema, and with Pusher you get just that. This is a brilliant picture of which that shows that Nicolas Winding Refn was able to make a standout picture using so little. The cast deliver some solid performances, and it elevates the story even more. Combine that with standout direction from Winding Refn, and you have a near perfect picture that is much more elaborate in its ideas and entertainment value than big budget Hollywood movies. This is raw cinema, a piece of film so riveting that you won't be able to tear yourself away right up to the final shot.

A raw, intense, stylish and hard-edged thriller. It boils with tension and energy from its script, actors and the incomparable talent of its director. Director, Nicolas Winding Refn crafts a bold, compelling, twisty and slick crime story. With no experience before, Pusher is an electrifying debut of very talented and promising talent. Kim Bodnia is terrific, he plays an unlikeable character who deserves whats coming to him but you kinda wish the tables would turn another way down the course of the film. A rare fine in a independent film and a start to an interesting trilogy. A well-done piece of work shot with no money but makes it feel more real and disturbing.

I liked it but seemed so simple and not as fast paced as I expected. He lost drugs and is screwed...thats about it? I mean theres nothing deep about a drug dealer and the violence wasn't the most brutal thing in the film. Either way, a good entry for Nicholas Winding Refn because years later in 2011 Drive came out!

A day by day account of a week in the life of Copenhagen drug dealer Frank whose life falls apart when a deal goes bad. Pusher is the portrait of a small time criminal filmed in documentary style that reminded me a lot of Shane Meadows in it's unflinchingly realistic approach. The camera follows Frank wherever he goes in the seven days it takes his world to disintegrate as all of his "friends" betray and turn on him once they sense weakness; the ultimate price of way of life that revolves around self interest. All the characters are completely believable, particularly the mildly unpleasant and emotionally repressed Kim Bodnia who won't even kiss his "girlfriend" because of his refusal to associate with whores, and the beautiful Laura Drasbaek who stubbornly refuses to accept that that is in fact what she is. The rather unlikable characters do make it rather difficult to relate to them and a bit of humour would've gone a long way to temper this, but I would have to say that the big weakness of the film is the finale; or rather the lack of it. I usually prefer a story to let you draw your own conclusions as to the outcome but at the end of this film I just felt that I'd been abandoned and left hanging there. It did make me want to watch the next instalment however.