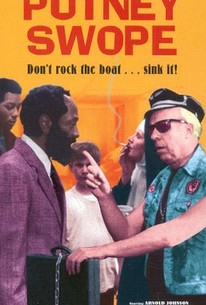 After several years working along the margins of the underground film scene in New York, director Robert Downey broke through to wider recognition with the arthouse hit Putney Swope, a wildly irreverent satire of race and advertising in America. Putney Swope (Arnold Johnson) is the token African-American executive at an otherwise all-white advertising agency when the chairman of the board unexpectedly drops dead. Through a fluke in the chain of command, Swope becomes the new head of the firm, and decides its time to do things his way. He fires nearly all the staff (except for his one token white employee), renames the agency Truth and Soul, Inc., and announces they'll no longer accept accounts advertising tobacco, alcohol, or war toys. The ads they do produce -- for acne remedies and breakfast cereal, among other things -- are wildly successful, and the iconoclastic ad agency (which only accepts payment in cash) is targeted by government operatives as a threat to the national security. Antonio Fargas and Allen Garfield lead the supporting cast; Mel Brooks makes a cameo appearance. ~ Mark Deming, Rovi

Antonio Fargas
as The Arab

Mel Brooks
as Mr. Forget It

Pepi Hermine
as President of the United States

Herbert Kerr
as Bodyguard No. 2

The situations include political caricature, but disappointedly nothing much beyond marginal interest occurs. The comedy is only intermittently funny and the satire is mostly shallow and obvious.

A satire on American ways of life, written and directed by Downey and misfiring on most cylinders.

If you're in a silly enough mood, you might have a good time.

Putney Swope was racist, a bit crude, but no one can say that it isn't one of the most (if not the only) provocative movies of the year. Everyone should go see it. If not for thorough enjoyment, then to "dig yourself."

On whatever level one approaches it, Putney Swope remains a marvellously funny piece of work.

The commercials... are absolutely brilliant, and the sheer gonzo tenacity of the whole enterprise makes it all work, even the stuff that doesn't work.

A way of giving the middle finger to Madison Avenue.

The humor is occasionally forced, with some cliched comedic devices serving as satire. The commercial parodies, however, are devastatingly funny and right on the money.

When the chairman of an ad agency dies, the board all secretly vote Putney Swope, the token black executive, as the company's new leader, assuming that no one else would vote for him. He immediately fires the cracker staff, hires brothers and changes the company name to "Truth and Soul Advertising." Wicked, politically incorrect and completely absurdist satire packed with nonsense and wordplay; the president is a pot-smoking dwarf and director Robert Downey Sr. dubbed all Putney's lines, so the black hero sounds like a Brooklyn Jew.

This movie is cool, it made its audience think about the racism in the media at the time and showed in a radically comedic way how things could change. I think this movie is awesome, but it has some weak spots, it could be a bit better. Overall, I liked it, it's good, and I highly recommend checking it out.

robert downey's dad produced this withering satire in 1969 giving madison avenue and 60's race relations a thorough skewering. it's a bit scattered and certainly dated with no-budget production values and the dubbing of swope's lines throughout bothered me. i wish i could give it more than 3 stars as i certainly admire the spirit behind it. of interest to fans of underground films and counterculture

The movie starts with a board meeting at a major advertising agency. Putney Swope is on the board for no other reason than the fact that he is black, and the agency needs a "token" on the board. Swope is ignoring the meeting, reading Jet magazine at the big table, and everybody is ignoring Swope... Suddenly, the CEO croaks on the spot. No time is wasted. A janitor is called to haul off the corpse, and the board immediately and unceremoniously tackles the business of electing a new CEO. And as the votes are tallied one by one, the tension is built up and then finally snapped in a hilariously ironic climax to the vote, that gives the viewer a delicious dish of logical implications to savor for the rest of the movie. If you've ever talked back to some stupid television commercial, you'll like seeing this movie. Too bad there don't seem to be any real Putney Swopes in the world.