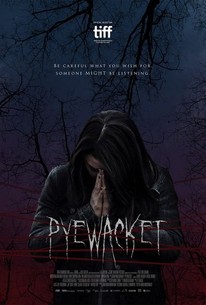 When you're dealing with demons, be careful what you wish for... In this ultra-unsettling occult nightmare, teenage Leah (Nicole Muñoz) finds solace from the recent death of her father-and from her strained relationship with her mother (Laurie Holden)--by dabbling in the dark arts. It all seems like harmless fun at first, until a blow out argument leads Leah to do the unthinkable: put a death curse on her mother. No sooner has the girl performed the ritual than she regrets it. But it may be too late, as an evil presence known as Pyewacket begins to make itself known--and threatens to destroy both mother and daughter. Backcountry director Adam MacDonald builds hair-raising tension around what's both a complex mother-daughter tale and a frightening fable about our darkest desires.

Pacific Rim: Uprising Is Not That Good

The director is out for blood, and while this is a slow-burn affair that craftily bides its time until just the proper moment to unleash a flurry of dexterously ominous thrills, the craven wickedness of it all is portentously intoxicating.

It's the rare horror film that's actually more effective in psychological terms than in suspense ones.

As a psychodrama about a troubled mother and daughter, this movie is gripping from start to finish.

Pyewacket is a slow burn chiller that is all the more impressive for its subtlety.

A horror-lite film that barely increases the heart rate.

MacDonald is trying to be a filmmaker of ideas here, but the metaphor doesn't develop or deepen as the film goes on.

It actually takes itself very seriously... I felt the terror between the characters and the teen.

Part family drama and part supernatural horror, Adam MacDonald's second feature, Pyewacket, shows what happens when a morbid curiosity with the occult becomes a terrifying pact that can't be undone.

Reportedly a horror flick, Pyewacket is at heart a film student short stretched into 90 minutes. And that's the least of its problems.

A grim representation of teenage anger that works due to fantastic performances and an intelligent script. [Full review in Spanish].

Pyewacket is a tale of what happens when people can't reconcile reality with fiction, when mental health issues allow fantasy and folklore to mingle with reality.

A solid genre film that leans too much on obvious symbolism. [Full Review in Spanish]

There are no featured audience reviews yet. Click the link below to see what others say about Pyewacket!