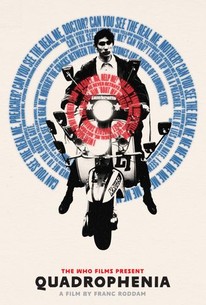 This film version of the Who's rock opera Quadrophenia makes a few tentative stabs at "explaining" the alienation of 1960s British working-class youth, but its major selling point is its nonstop rock-and-R&B musical score, including the hit single "Love Reign O'er Me." Phil Daniels (replacing the original opera's Roger Daltrey) plays Jimmy, a member of a well-dressed, drugged-up teenaged gang called the Mods, forever duking it out with the cycle-punk Rockers. The rivalry between the two gangs comes to a head during three tempestuous days in the seaside town of Brighton. Here Jimmy makes love to lovely local Steph (Leslie Ash), and forges a strong friendship with unofficial Mod leader Ace Face (Sting). A series of disappointments and setbacks in his own London neighborhood convinces Jimmy to return to Brighton to pick up the pieces. If you aren't fascinated by the visual pyrotechnics of Quadrophenia, just close your eyes and revel to the soundtrack music of the Who, James Brown, Marvin Gaye, the Chiffons, Manfred Man, and many others. ~ Hal Erickson, Rovi

Sting
as The Ace Face

Gary Holton
as Leader of Rockers
View All

Quadrophenia is every bit as fun, occasionally ugly, and upsetting as the heady days of discovering early independence and finding a direction in life can be.

Roddam's look back at an angsty young man in '65 is a throwback to the kitchen-sink dramas that began plumbing the depths of lower-class lives then. Reeking with a restless teen spirit, Quadrophenia leads us down adolescence's blind alleys of rebellion.

Manages to be both quintessentially British and irrefutably universal.

Director Franc Roddam shot the film with a gritty, realistic feel and the themes of youthful rebellion and confusion are absolutely timeless, magnified by the specificity of the setting rather than being limited by it.

An anti-musical...based on The Who's 1973 "rock opera" concept album...all the more brilliant for this seemingly counter-intuitive approach. [Blu-ray]

When you're an angry young man, there's no better way to prove you're an individual than to dress and act exactly like everybody else.

The film lives through the superb raw angst-ridden performance of Phil Daniels.

"Quadrophenia" is a glorious representational story of male teen angst that transcends its British locations and great music with a sense of the confused romantic notions that young men the world over carry with them.

Quadrophenia succeeds through its devil-may-care attitude and energy. It feels like a low-budget homemade movie from the period.

Mods vs. Rockers, Battlefield: England, 1960s. Disenchantment with adulthood and responsability hits harder than fists or kicks in the head for a real Mod like Jimmy. A reckless youngman infatuated with the pleasures of his generation, vespas, italian suits, drugs and rock paraphernalia. Deep in my mind I envy him. He had his winning share, at a back alley, a climax, a perfect moment to live for. Hence destruction was unavoidable, there was no turning back, he had to kiss life goodbye with dignity, the kind of dignity winners never get to feel.

A Classic Brit film with a cast full of Actors who went on to be well known names, whether that be in Soaps, Sit-coms, films or the Music business. A film that captures an era of music and rival gangs of that time. The ending of the film, I'm sure adds to the already controversial edge to this film for it's time.

The Year Was 1964, and The Battle Was Just Beginning!