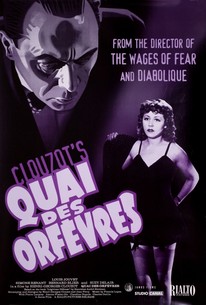 In this thriller, two miserable lovers inadvertently find themselves involved in a creepy film producer's murder that occurred when the lascivious fellow made a pass at the woman. To stop him, she crashed a champagne bottle over his head and kills him. Her lover rushes in as he too, wanted to kill the producer. During the police investigation, the man considered a suspect until his girlfriend tells all to the cops. Later it is discovered that neither are guilty. The producer was really killed by a gangster.

Robert Dalban
as Paulo, a Vagrant

Clouzot is able to reveal a complex and interactive working-class world in which cops and criminals are sometimes difficult to tell apart.

Direction by Henri-Georges Clouzot takes full advantage of every possible opportunity to bring out character and manages to keep the tempo at a fast clip all the time.

Jouvet's Maigret-esque cop gets all the best lines, and gives the film its human, tragic focus.

An elegant show-biz noir that weaves an intricate web of deception and intrigue.

For those with a taste for classic movies, it's like finding a buried treasure.

An intriguing film about jealousy, suspicion and police traps. I expected no less from Clouzot. [Full review in Spanish]

The exquisite noir lighting and location work suggest a kind of realism, which Clouzot constantly subverts with near-deranged expressionist elements. To watch Blier staggering down an alley in this film is to recognize the limits of color film.

Watching Jouvet unravel the other characters as he begins to unravel the mystery is a brilliant lesson in minimalism.

Very typical of Clouzot's films, he utilizes sound and score to enhance tension and his penchant for mystery uses the whodunit to good effect, always shifting his subjects from innocence to guilt and back.

A superior noirish thriller which gets right under the skin of the seedy world it inhabits.

Even for a more commercial effort, Clouzot lends his unique style and voice to a well-written and exquisitely-directed crime story that has great touches of humor and some very delightful performances by Delair and Jouvet (who is hilarious and gets the best lines).

Beautifully photographed noir from master Clouzot with a perfect balance of farce and post-war social criticism.

one of the most remarkable screenplays of any film ive seen. the details of the story are complex, but simply told and without missteps. clouzot deserves far more respect than he receives in the U.S., and this film simply adds to his legacy of astoundingly good suspense and horror films. blier was fantastic, and even the supporting players in smaller roles such as larquey as the cab driver deliver very solid performances. the ending is the best part, as it was unexpected even for clouzot, a director who is great with unexpected endings. great film.

i enjoyed this. it's not a nailbiter like some of clouzot's other films but has a nice atmosphere and some really interesting characters, especially the detective and the photographer