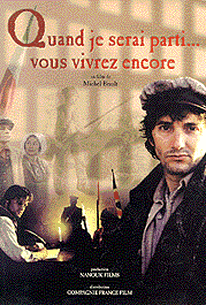 An important moment in Canadian history is brought to the screen in this drama drawn from historical documents of the period. In 1838, Francois-Xavier Bouchard (Francis Reddy) is a member of a group of French-Canadian rebels calling themselves Les Patriotes, who are hoping to remove the British-based government from Lower Canada (now known as Quebec). Having just returned to Canada after a brief exile in the United States, Bouchard aligns himself with Les Patriotes against the advice of his family, who fear for his safety. Their fears prove well-grounded when Bouchard is captured in a raid on a British stronghold, and after an attempt to escape to America, Bouchard is subjected to a trial he feels has been fixed from the start. ~ Mark Deming, Rovi

There are no critic reviews yet for Quand je serai parti... vous vivrez encore (The Long Winter) (When I'm Gone...You'll Still Be Alive). Keep checking Rotten Tomatoes for updates!

There are no featured reviews for Quand je serai parti... vous vivrez encore (The Long Winter) (When I'm Gone...You'll Still Be Alive) at this time.