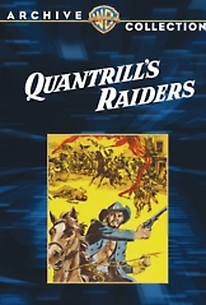 The oft-told tale of controversial Southern-sympathizing outlaw Quantrill is recounted again in this low-budget western. Leo Gordon, possessor of one of the meanest faces in the movies, plays Quantrill, but top billing is bestowed upon Steve Cochran as Westcott, a Confederate officer assigned to collaborate with the vigilante leader in a raid on an ammunition depot in Lawrence, Kansas. Westcott is forced to move on when the ammo supply is moved, but the vengeance-driven Quantrill insists upon remaining in Lawrence, there to indulge in one of the bloodiest and most sadistic raids in Kansas history. Quantrill's Raiders was directed by Edward Bernds, who'd come a long way since his Three Stooges shorts of the early 1950s. ~ Hal Erickson, Rovi

Will Wright
as Judge Wood

There are no critic reviews yet for Quantrill's Raiders. Keep checking Rotten Tomatoes for updates!

There are no featured reviews for Quantrill's Raiders at this time.