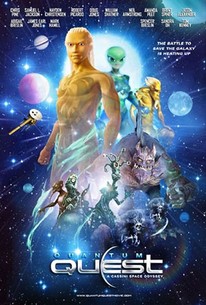 Computer animation combines with actual footage from NASA/ESA space missions to tell the tale of Dave (voice of Chris Pine), a simple photon on a serious mission. Dave likes it on the sun, and doesn't see any reason to venture out into the vast, cold darkness of space. When The Void (voice of Mark Hamill) dispatches his three top officers on a mission to destroy everything in the cosmos comprised of matter, however, it's up to Dave to prevent the universe from becoming an enormous black hole. And he won't be alone on his daring mission, because at the center of the sun dwells The Core (voice of William Shatner), a benevolent being who summons the strongest photons and neutrinos at his disposal to aid Dave in his battle against the dreaded Void. Quantum Quest also features the voices of Samuel L. Jackson, Neil Armstrong, James Earl Jones, Abigail Breslin, Brent Spiner, Doug Jones, and Jason Alexander.

There are no critic reviews yet for Quantum Quest: A Cassini Space Odyssey. Keep checking Rotten Tomatoes for updates!

There are no featured audience reviews yet. Click the link below to see what others say about Quantum Quest: A Cassini Space Odyssey!