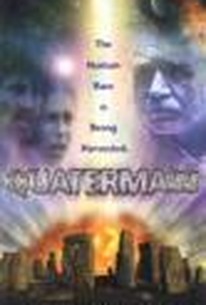 The Quatermass Conclusion is comprised of highlights from the 1979 British TV serial of the same name. Like the earlier Quatermass projects of the 1950s and 1960s, the guiding force behind Conclusion was prolific screenwriter Nigel Kneale, though the series (and the film) hardly represent his best work. This time John Mills is Prof. Bernard Quatermass, once more trying to convince the authorities that malevolent extraterrestrials do indeed exist. Quatermass' quandary is the sudden disappearance of several London youths. He deduces that the missing persons are the victims of a "death ray," wielded by hostile space aliens. Though movie special effects had made great strides by 1979, Quatermass Conclusion looks cheaper and less convincing than the classic Quatermass films (The Creeping Unknown, Enemy From Space, Five Million Miles To Earth) which preceded it in the 1950s and 1960s. ~ Hal Erickson, Rovi

Critic Reviews for The Quatermass Conclusion

It works within its limitations.

... an ingenious bit of speculative fiction that combines science, myth, religion, and sociology...

Audience Reviews for The Quatermass Conclusion

There are no featured audience reviews yet. Click the link below to see what others say about The Quatermass Conclusion!