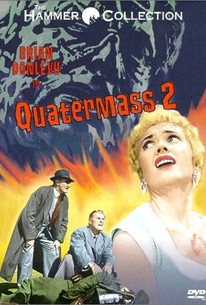 Originally titled Quatermass II, Enemy from Space was the sequel to The Quatermass Xperiment (US title: The Creeping Unknown). Based on the British TV serial by Nigel Kneale (who reportedly disliked the finished product), the film stars Brian Donlevy, repeating the role of Professor Quatermass. This time, the good professor must contend with a "meteor shower" which turns out to be a secret alien invasion. The extraterrestrials arrive on earth in rocklike vehicles, then take over the minds and nervous systems of earthlings, the better to go about their business undetected. Subliminally a cruel satire of British bureaucracy and obfuscation, Enemy from Space also works on a pure-horror level, building slowly and methodically to a powerhouse finale. For many years a "lost" film due to legal tangles, Enemy from Space has recently become available again on video and cable TV. ~ Hal Erickson, Rovi

John Van Eyssen
as The P.R.O.

Val Guest's direction is as uncertain as script on which he collabs with Nigel Kneale [author of original story], with the result that all characters are stodgy.

Despite some clumsy moments that have not worn well, it remains one of the more bizarre and impressive of the early British horror pictures.

The best of the original trilogy, choked with a pervasive air of paranoia and panic.

This is one of the best science-fiction films ever to come from Britain.

A masterful near-satire of Cold War paranoia and, arguably, the best of the Quatermass series.

Brilliant early sci-fi horror that many TV shows and films today owe a debt to.

Slightly better than The Quatermass Xperiment, Quatermass 2 is an almost completely different animal than its predecessor. Brian Donlevy is a less dickish Quatermass this time around as he tries to warn the town about an alien invasion instead of playing science and politics. The top secret base, the soldiers and all the imagery they bring are pretty damn frightening. The buildup to the 2 minutes of the monster(s) you eventually see is worth it. Unlike its predecessor, Quatermass 2 is entirely worth the trouble.

excellent paranoid thriller aka enemy from space. professor quatermass discovers a mysterious 'area 51' in the english countryside. donlevy seems more committed to his role this time out; he's even learned to pronounce his name. pretty decent effects and great location. one more smart 50's sci fi from hammer, maybe the best of the quatermass series

One of the best early sci-fil efforts I have seen, this movie about an alien invasion was likely the blueprint for such films as "Invasion of the Body Snatchers" among others. Crackerjack acting, paranoia, suspense, thrills, chills and a healthy dose of gunplay action..this film has it all and is to be applauded for its originality. Ahead of its time and a compelling watch.