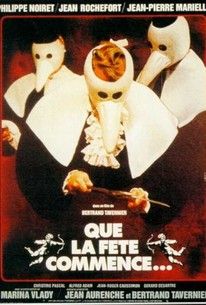 The second of director Bernard Tavernier's first three critically acclaimed films, this historical costume drama was the winner of four Cesars. Philippe Noiret stars as Philippe d'Orleans, regent to nine-year-old King Louis XV in 1719, four years after the death of the regent's grandfather, Louis XIV. A hedonist and free thinker who is somewhat limited by his love of sexual excess, his noble stature, and his complete lack of empathy for those on the lower social strata, Philippe serves during a time of rebellious talk and famine, swimming against the tide of social upheaval to maintain the status quo by allying himself with the Abbé Dubois, a foreign minister (the son of a peasant), who claws his way to the post of archbishop because its God-given power and authority isn't contingent on men. Meanwhile, the Marquis de Pontcallec (Jean Pierre Marielle) begins to set forth plans to secede from France and incorporate the Republic of Brittany. The musical score of Que la Fete Commence. . . was composed by the real-life Philippe d'Orleans. ~ Karl Williams, Rovi

Thierry Lhermitte
as Count of Horn

Jacqueline Parent
as Severine
View All

Well made and acted, with an effective cinematography, the film is an amoral, pagan, and godless party. [Full Review in Spanish]

There are no featured audience reviews yet. Click the link below to see what others say about Que la fête commence... (Let Joy Reign Supreme)!