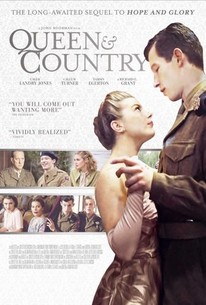 QUEEN AND COUNTRY is the hilarious follow-up to John Boorman's HOPE AND GLORY (1987 nominated for 5 Academy Awards), when 9-year-old Bill Rohan rejoices in the destruction of his school by an errant Luftwaffe bomb. QUEEN AND COUNTRY picks up the story nearly a decade later as Bill (Boorman's alter-ego), played by a charming Callum Turner, begins basic training in the early 1950s, during the Korean War. Bill is joined by a trouble-making army mate, Percy (Caleb Landry Jones). They never get near Korea, but engage in a constant battle of wits with the Catch-22-worthy, Sgt. Major Bradley -- the brilliant David Thewlis. Richard E. Grant is their superior, the veddy, veddy, infinitely put-upon, aptly-named Major Cross. A superb ensemble cast limns a wonderfully funny and often moving depiction of a still-recovering postwar England. (C) BBC America

Critic Reviews for Queen and Country

It showcases Boorman's great humanity, but (like Hope and Glory, for that matter) it is almost entirely free of the mild derangement that characterises his best work.

This is a deeply personal film which also stands as an intriguing record of a period not often revisited in film -- that drab period postwar and pre-Suez in which the country itself, like the flailing young hero Rohan, is struggling to define itself.

Everything you'd expect from distinctive film-maker John Boorman: a heartfelt story told in arresting visual tones through a melange of conflicting accents and strangely theatrical staging.

This is the sequel to 1987's Hope and Glory, a coming-of-age yarn awash with illicit passion.

It's a string of little jewels masquerading as a story. The army-life japes and escapades, climaxing in the stealing of an officers' mess clock, might seem picayune. But they form a cumulative glitter.

A wild picture with its parts running willy-nilly in every possible direction.

Life and cinema united in the mind of the protagonist, providing really surreal episodes in the barracks, undoubtedly the most interesting of the film. [Full Review in Spanish]

Though one doesn't have to experience Hope and Glory to appreciate Queen and Country, it does lend a bit of weight to the narrative continuation if you are familiar.

After two long hours the film comes to its conclusion... not with a bang but a whimper.

In the end, you may even like Queen and Country more than Hope and Glory, which is saying a lot.

The pleasures of Queen and Country lie in its beauty, its performances, its privileging of personal perspectives and its gentle look at a period in British history which is seldom portrayed.

Audience Reviews for Queen and Country

I really enjoyed this film. Well acted, with a great cast and a touching story about friendship through troubled times. This is apparently a sequel to a film called Hope and Glory so I will have to watch that now to see how it all began.