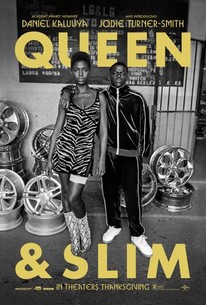 While on a forgettable first date together in Ohio, a black man (Get Out's Daniel Kaluuya) and a black woman (Jodie Turner-Smith, in her first starring feature-film role), are pulled over for a minor traffic infraction. The situation escalates, with sudden and tragic results, when the man kills the police officer in self-defense. Terrified and in fear for their lives, the man, a retail employee, and the woman, a criminal defense lawyer, are forced to go on the run. But the incident is captured on video and goes viral, and the couple unwittingly become a symbol of trauma, terror, grief and pain for people across the country.

Melanie Halfkenny
as Naomi
View All

Queen & Slim bowls you over with its powerful, charged story. Not one to be missed.

The whole film has this dreamy, heady atmosphere, but despite all the things going on around it and all the things it's about...it is, at its heart, a love story.

As this hot couple unwittingly become Black Lives Matter icons, the provocative script is increasingly peppered with implausible beats and infuriatingly dim decisions but it's worth riding those out to reach the transcendent moments between.

Effortlessly charismatic and oozing chemistry, this is a duo to die for.

The heights that Matsoukas reaches are stunning, and the brief blunders made don't seem like something she's unlikely to repeat.

It's a movie that I think tries to do a lot of things... What it's trying to do in terms of social commentary, I don't think it fully reaches its goal.

I think this would have been a much more effective piece of social commentary if it just focused on these two and their struggles. When it does focus on these two, it's this really cracking on-the-run thriller.

With terrific performances Queen & Slim transcends the outlaws-on-the-lam genre. Instead it is a timely humanistic drama that combines resilience with despair.

It's an uneven, if watchable, lovers-on-the-lam film.

There are no featured reviews for Queen & Slim at this time.