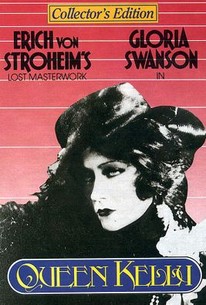 A young convent girl is seduced by a European nobleman, arousing the ire of his bride-to-be Queen and eventually finding herself exiled to a brothel in East Africa. Visually striking and perverse, Erich von Stroheim's last silent, from which he was discharged by Gloria Swanson, was hastily completed by her with talkie sequences.

Gordon Westcott
as Lackey
View All

Gloria Swanson in one of her more famous roles, directed by Von Stroheim.

Only stands as an incomplete work that represents what might have been great if so much of it wasn't missing.

A victim of the inflated ego of star Swanson and director Von Stroeheim, this unfinished work is endlessly fascinating for its overreaching scope and wanton glamor.

After reading the glorious memoir Swanson on Swanson by Gloria Swanson I was ravenous to see more of her silent pictures from the dawning of the movie industry. This gem from overspending, OCD ridden director Eric von Stroheim was never officially finished as the production went over budget and there were significant disputes between Stroheim and Swanson, but what was salvaged is a beautiful piece of filmmaking. A type of grown up fairy tale with themes of romanticized violence, renegade from the Catholic Church, and the gamine charm of Swanson herself. Though the ending set in Africa was never filmed, which is a missing plot point, it's still a good watch for anyone with little resources for their own filmmaking endeavors and need inspiration. This was done with little budget and a million tiny problems, but is now a classic.

Wow, that was a great love story, I just wish they could have found all the footage for the ending so we could see it all. I really liked this movie, and if you're a fan of Swanson, you should see it too.