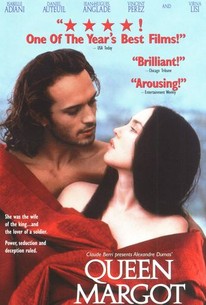 The historical novel by Alexandre Dumas was adapted for the screen with this lavish French epic, winner of 5 Césars and a pair of awards at the Cannes Film Festival. Isabelle Adjani stars as Marguerite de Valois, better known as Margot, daughter of scheming Catholic power player Catherine de Medici (Virna Lisi). Margot is an heiress to the throne during the late 16th century reign of the neurotic, hypochondriac King Charles IX (Jean-Hugues Anglade), a time when Protestants and Catholics are vying for political control of France. Catherine decides to make an overture of good will by offering up Margot in marriage to prominent Protestant Huguenot Henri of Navarre (Daniel Auteuil), although she also schemes to bring about the notorious St. Bartholomew's Day massacre of 1572, when tens of thousands of Protestants are slaughtered. The marriage goes forward but Margot doesn't love Henri and takes a lover, the soldier La Mole (Vincent Perez), also a Protestant from a well-to-do family. Murders by poisoning follow, as court intrigues multiply and Catherine's villainous plotting to place her son Anjou (Pascal Greggory) on the throne threatens the lives of La Mole, Margot and Henri. The American release version was cut to 145 minutes. ~ Karl Williams, Rovi

Marina Golovine
as Lady in Waiting

Erwan Dujardin
as Page
View All

It's Romeo and Juliet knee-deep in carnage, staged with Jacobean fury, lurid sensuality and high style by the recklessly gifted Chereau.

That's a lot of plot-and plotting-to sort out, and while Chéreau and co-writer Danièle Thompson occasionally fail to explicate it clearly, the center of the film holds strong.

A model of heaving, combustible history, in which period lavishness and performance energy aren't mutually exclusive.

Death seems to linger in every inch of the frame, yet the film lives and breathes like few others.

Though Queen Margot's sound, sets, costumes, and camerawork collectively stun, Chéreau prioritized his actors, and he gave his ensemble ample freedom to perform.

Everything's scenery, even the story.

An elegant costume drama with significant historical context reconstructed as a soap opera of sexual conquests hidden by the veneer of warring religious regimes, Queen Margot is scintillating cinema.

The achievement of Chereau's film is to reveal the people, in all their squalor and occasional grace, behind the myth of royalty -- that, and to make two-and-a-half hours zip by.

Queen Margot is one of the great modern historicals. This is not a polite drawing-room story of men in tights and women in ruffled collars.

Among its many other accomplishments, 'Queen Margot' deserves a special prize for its inventive use of poisons - one receives "death by book."

will linger in memory long afterwards

Historical drama of epic proportions, sumptuous yet gritty, held together by fine performances from Isabelle Adjani, maidenly, distant, yet passionate and Virna Lisi as the villainous Catherine de Medici. Labyrinthine yet compellingly flamboyant.

This film should be considered a classic, but instead, I'm afraid, it's considered completely underwatched, underappreciated, and underrated, and it's deserving of so much more!