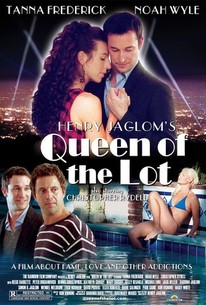 Queen of the Lot Photos

Maverick indie filmmaker Henry Jaglom moves from the sweet poignancy of his 2009 Irene in Time to knowing Hollywood satire with this romantic comedy that finds him teaming with actress Tanna Frederick for the third time. Frederick portrays Maggie Chase, a B-list star who longs to find love and fulfillment and achieve household-name status, but must contend with twin products of her wild behavior: a court-ordered electronic ankle bracelet and temporary house arrest. Fortunately, Maggie has a team of clever spin doctors (Ron Vignone, David Proval, Zack Norman, and Diane Salinger), who manage to turn her drunk-driving activities into attention-grabbing tabloid fodder. She also draws on the support of a movie-star beau, Dov Lambert (Christopher Rydell), equally known for his no-holds-barred behavior. For a time, it looks as though Maggie's grandest dreams will actualize, as her national fame crescendos, but her life grows more complicated when she follows Dov home to meet his kin, and runs headfirst into a series of show-business legends (played by Peter Bogdanovich, Dennis Christopher, Kathryn Crosby, Mary Crosby, Sabrina Jaglom, and Jack Heller). She also meets Dov's brother, failed writer Aaron Lambert (Noah Wyle), who seems tailor-made for Maggie with his ability to penetrate her superficial facades, but must deal with lingering issues in his own life and past.

Kevin Parry
as Paparazzo
View All

Critic Reviews for Queen of the Lot

Mocking Tinseltown is a pretty exhausted subject, and even Jaglom, a genuine insider, has a hard time making it fresh.

Very little in it suggests that Jaglom has changed. But I liked it. He might have been a visionary after all.

Jaglom can craft a scene and stage organic conversations, but if his saps and suckers never wander beyond a hermetic view of the real world, then so what?

Queen of the Lot is sort of sweet in its earnestness, sort of frustratingly delusional, and ultimately unsubstantial -- but there are moments of meta-provocation that almost justify the lopsided enterprise.

By the end of the film, I just felt sorry for Frederick and wondered if another director might be able to find a way to showcase her better.

A provocative and funny satire that's somewhat uneven, awkward and contrived. Tanna Frederick once again proves to be a sexy, charismatic and immensely talented actress.

This wonderful character-driven film about a young woman who, with every fiber of her being, wants to be famous is funny, touching and oh-so romantic.

Co-opting claims of having created an insufferable lead character, Jaglom includes a meta-moment in which Maggie uncovers a quote from real-life Boston Globe critic Ty Burr.

Audience Reviews for Queen of the Lot

There are no featured audience reviews yet. Click the link below to see what others say about Queen of the Lot!

Queen of the Lot Quotes