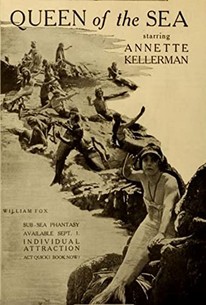 Queen of the Sea Photos

Annette Kellerman, the Australian swimming star of the early 1900s, made a number of films, most of them in the 1910s, which displayed her athletic skills. Most of these films were underwater fantasies, and this one was no exception. Here, Kellerman is Merilla, a mermaid who is the "Queen of the Sea." Not satisfied with being a mermaid, she wants a mortal human body with an immortal soul. She discovers she can achieve this if she saves four human lives. King Boreas, master of storms (Walter Law), is wrecking ships left and right so his daughters, the Sirens, can drown the sailors. Merilla sees this as a prime opportunity to save some lives and rescues three sailors. Boreas, however, captures her and locks her up. She is rescued by the appropriately named Prince Hero (Hugh Thompson), and in revenge Boreas overturns his bark. Merilla saves him and Boreas then imprisons Hero's betrothed, Princess Leandra (Mildred Keats). Merilla rescues her, too, but the princess realizes that Hero and Merilla -- who has earned her human stripes -- love each other, so she is willing to let him go.

Annette Kellerman
as Merrilla, Queen of the Sea

Minnie Methol
as Duenna
View All

Critic Reviews for Queen of the Sea

Aside from beautiful tinting and the undoubted aquatic prowess of Annette Kellermann, I'm afraid I shall have to class Queen of the Sea as rather poor entertainment.

Of course, the outstanding item in this sort of a film is the question of how much footage registered the scantly clad mermaids. I think there is enough to hold the interest and tease 'em along without overdoing it.

It possesses few situations with heart interest, being an entertainment for the eye only.

Queen of the Sea, the latest Fox spectacle to feature the famous swimming and diving expert [Annette Kellerman], is skillfully contrived to exhibit the aquatic accomplishments of its heroine.

There are many almost unbelievable feats of daring and skill in which Miss Kellermann surpasses her past records. The predominant thrill of the picture is its exquisite beauty.

There are no featured reviews for Queen of the Sea at this time.

Queen of the Sea Quotes