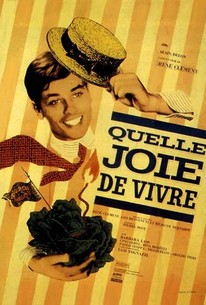 Just after he made Alain Delon a star in the successful Plein Soleil (Purple Noon), director René Clement works with him again in this slightly long but entertaining satire set in Italy in the 1920s. Ulisse (Delon) is a naive young man out looking for a job after being released from the army. He drops the offer he gets from a group of fascists to go in with the Fossatis, a family of anarchists (unknown to him). Humor is supplied in the misadventures of Ulisse and a few others, such as two would-be explosive experts (Ugo Tognazzi and Aroldo Tieri). Thanks to the daughter (Barbara Lass) of the head honcho, there are a few romantic moments in store for Ulisse. ~ Eleanor Mannikka, Rovi

There are no critic reviews yet for Quelle Joie De Vivre. Keep checking Rotten Tomatoes for updates!

There are no featured reviews for Quelle Joie De Vivre at this time.