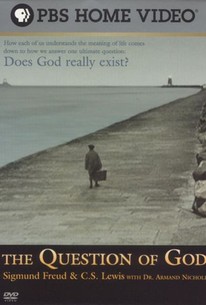 The Question of God is a documentary based on a class taught by Dr. Armand Nicholi. Sigmund Freud and C.S. Lewis are both regarded as two of the finest thinkers of their time. However, each had a radically different belief in religion. Where Freud felt that there was no God, Lewis utilized logic in order to explain his belief in a higher power. This documentary looks at both men's lives in an attempt to analyze how these two strains of thought have an impact on all people.

There are no critic reviews yet for Question of God: C.S. Lewis and Sigmund Freud with Dr. Armand Nicholi. Keep checking Rotten Tomatoes for updates!

There are no featured reviews for Question of God: C.S. Lewis and Sigmund Freud with Dr. Armand Nicholi at this time.