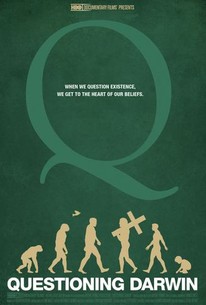 Literal and creationist interpretation of the Bible is the fastest-growing branch of Christianity in the U.S. This film takes an in-depth look at the views of these Christians who reject Charles Darwin's theory of evolution--while also examining how Darwin handled the question of God himself as he developed his theory of natural selection in the mid-1800s. Featuring interviews with Darwin historians, biographers, ministers and creationist Christians, along with letters and writings of Darwin (voiced by actor Sam West), the film takes a balanced look at this 150-year-old debate.

There are no critic reviews yet for Questioning Darwin. Keep checking Rotten Tomatoes for updates!

There are no featured audience reviews yet. Click the link below to see what others say about Questioning Darwin!