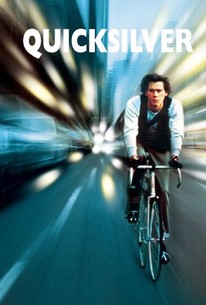 In this underscripted and not wholly convincing drama, Kevin Bacon plays Jack Casey, an up-and-coming broker who crashes on the stock market one day and cashes in whatever he has left to become a bicycle messenger in San Francisco. Although not exactly a logical alternative, bicycling the hilly streets of S.F. turns out to be dangerous after Casey runs into Gypsy (Rudy Ramos), the street pusher who has the messengers run drugs for him. A series of characters and events drop in and out of the conflict between Gypsy and Casey, including love interest Terri (Jami Gertz) and Casey's friend Hector (Paul Rodriguez). Music dominates throughout the film which includes scenes of breakdancing on bikes.

Joe Leahy
as Brokers at Lunch

Michael Fox
as Brokers at Lunch

As long as the characters are doing stunts or whizzing impossibly through city traffic to a strong rock beat, there's something to watch. For the rest of the time, ''Quicksilver'' is as much fun as a slow leak.

The movie has moments when it comes to life, when it threatens to tell a story about interesting people, and then it wanders off into inane scenes designed only to sell records.

Quicksilver fares best in its familiar yet entertaining opening stretch...

Finally, the "ten-speed bike" opus we've all been waiting for.

Not even the rock soundtrack can infuse this story with any momentum or meaning.

Mediocre '80s movie with some characters that don't quite make sense.

Kevin Bacon followed his breakout role in Footloose with this story of a washed up stock broker who finds his calling as bicycle messenger. He's surrounded by stereotypical, yet colorful characters played by recognizable character actors like Paul Rodriguez, Louis Anderson, Jamie Gertz, and pre-Matrix Laurence Fishburne as Voodoo, a messenger who doesn't care about what he delivers, even if it is for the local drug runner, known as The Gypsy. The movie is filled with lots of bicycyle stunts, and even an impromptu freestyle competition. There's also character conflict as Bacon tries to recapture his stock broker ways, better the lives of his fellow messengers, and bring down The Gypsy when he begins to hurt his friends. A mid-80's movie, it's filled with big hair, wild clothing styles, and requisite pop music, probably meant to fuel soundtrack sales. For Bacon it was cashing a paycheck on the road to cult classics like Tremors, and adding more links to the Six Degrees Of Kevin Bacon game.