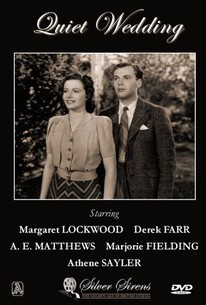 The old reliable plot device known as premarital hanky-panky was the basis of the Esther McCracken stage play Quiet Wedding. The film version, scripted by Terence Rattigan and Anton de Grunewald, tones down some of the more censorable elements of the play, though not enough to completely mollify American censors. Margaret Lockwood stars as bride-to-be Janet Royd, who is driven crazy by the well-meaning interference of friends and family in the hours prior to her wedding. Sensing that she'll never have a moment alone with her fiance Dallas Chaytor (Derek Farr) even after they're married. Janet agrees to slip away with Dallas the night before the Big Event for a few hours of uninterrupted bliss. Nothing much really happens, at least not on screen, but the censors weren't able to blot out the gleam in the groom's eye-or the bride's, for that matter. ~ Hal Erickson, Rovi

Muriel George
as The Cook (uncredited)

There are no critic reviews yet for Quiet Wedding. Keep checking Rotten Tomatoes for updates!

There are no featured reviews for Quiet Wedding at this time.