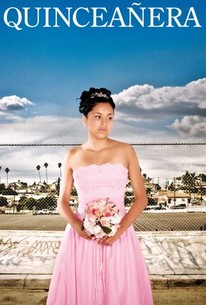 Critics Consensus: This slice-of-life story of a teenage girl in Echo Park is both a sweet crowd-pleaser and a perceptive look at socioeconomic community issues.

Critics Consensus: This slice-of-life story of a teenage girl in Echo Park is both a sweet crowd-pleaser and a perceptive look at socioeconomic community issues.

Critic Consensus: This slice-of-life story of a teenage girl in Echo Park is both a sweet crowd-pleaser and a perceptive look at socioeconomic community issues.

A Hispanic teenager travels the rough road to adult responsibility earlier than she expected in this independent drama. Magdalena (Emily Rios) is a young Latina who is looking forward to her upcoming quinceañera celebration -- the 15th birthday party that marks the passage into adulthood for Mexican-American women. Magdalena's expectations are raised by the lavish party her older cousin Eileen (Alicia Sixtos) gets for the occasion, but Magdalena's mother (Araceli Guzman-Rico) and father (Jesus Castanos-Chima) insist on a lower-key affair that will focus on the more responsible aspects of grown-up life. However, Magdalena gets a crash course in that subject when she discovers she's pregnant with the child of her boyfriend, Herman (J.R. Cruz); life at home becomes unbearable for her, and she leaves to live with her more sympathetic uncle, Tio Thomas (Chalo Gonzalez). Home for Tio Thomas and Magdalena is a small apartment in a building owned by James (Jason L. Wood) and Gary (David W. Ross), a gay couple looking to gentrify the neighborhood. Magdalena strikes up a friendship with her cousin Carlos (Jesse Garcia), a roughneck teen with a good heart who is also on the outs with his family when they discover he's experimenting with his sexuality. Produced in part by Todd Haynes, Quinceañera received its premiere at the 2006 Sundance Film Festival.

Johnny B.
as Slumlord

Nancy Badillo
as The Quinceañera Court

Leslie Campos
as The Quinceañera Court

Mario Galvez
as The Quinceañera Court

Mercia García
as The Quinceañera Court

Diego Pablo
as The Quinceañera Court

Jason Rodriguez
as The Quinceañera Court

This is a satisfying, spicy little picture.

The storytelling remains less than satisfying, particularly the ending.

An unexpected self-portrait from a town that loves to tell stories about itself, often to the exclusion of the countless equally deserving dramas unfolding just a few blocks away.

The setting and the people in it make Quinceanera a party worth an RSVP.

The film is serious and thoughtful but not overwrought.

This celebrated Sundance prizewinner doesn't look quite so special. Actually, it seems Very Special--as in one of those Very Special Episodes of an ongoing television series.

The writing is not always as developed as one would wish it, but this seems almost paltry in light of the dramatic truth and rivetingly real performances which are elicited.

(the writer-directors) fill their story with well-observed contrasts... Although 'Quinceanera' is full of distinctly Hispanic sounds and flavors, its themes of tolerance and understanding should apply to any culture.

The film is filled with heart and good humor, but there is a bit of edge to it as well.

I like the plot but it was lacking something.

Impressive acting all round, the story?s focus is on being an outsider within a community and is a pretty original idea, however my advice would be not to read the synopsis before watching, as it is a bit of a story spoiler. This is certainly not a movie made for teens, it will be enjoyed by anyone who enjoys realistic Drama.

It was pretty good. I liked the ending.

This movie was a lot more serious than i was expecting. Every minute is entertaining and full of heart. It was refreshing to see a gay latino thug on film handled so well. The ending is a little abrupt, but it makes sense. I love Mexicans!