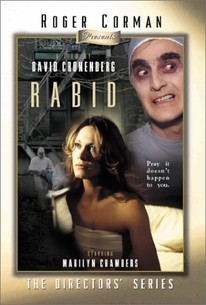 Miguel Fernandes
as Man in Cinema

Vlasta Vrana
as Cop at Clinic

Jack Messinger
as Policeman on Highway

Robert A. Silverman
as Man in Hospital

Basil Fitzgibbon
as Crazy in Plaza
View All

Revolting, yes, but still, an intelligent predecessor to some more moronic efforts in the same genre.

Here is an extremely violent, sometimes nauseating, picture about a young woman affected with rabies, running around Montreal infecting others.

None of the other recent apocalypse movies has shown so much political or cinematic sophistication.

Ultimately Rabid boils down to zombified sluts and shock moments but it's an irresistible combination that Cronenberg handles well.

Still holds up just as well today as it ever has... this new release of Rabid is an utter delight of a package from 101 Films

Cronenberg casts [Chambers] in a different kind of skin flick, and allows her to weaponise her seductive charms and to penetrate those who would do the same to her - all in the service of an animalistic lust (for blood) that is Insatiable...

Cronenberg tackles issues of a hypersexual society, in which bodily technology has far surpassed our moral capacities.

"It's Cronenberg's best full-stop horror movie, I think, one where the horror comes first and the subtext is almost accidental. Later, it would be the reverse..."

Remains effectively squirmy, gruesome, and even prescient nearly forty years after its release.

After the shock tactics of Shivers, Cronenberg's next venture into body horror is more subdued, but holds up surprisingly well.

Cinema as a sustained bout of fever, a melancholy defense of Pandora

While Chambers does add some resonance to the film as a sexual icon, her acting ability is decidedly limited.

Yet more gross-out fun from Cronenberg. This is basically Shivers again on a much larger scale as the chaos and madness of rabies infected people plague the city of Montreal thanks to the vampirous Marilyn Chambers and her nasty armpit. If you liked Shivers and other infection/plague movies like 28 days Later than this is worth a viewing.