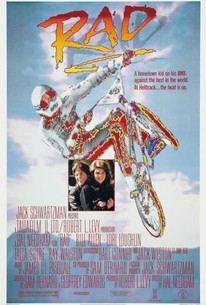 This film's for the BMX bike racers of the world. A small town is out to raise funds by building a BMX racetrack and sponsoring a major race. They sponsor their own small-town hero Cru (Bill Allen) who's up against the big-monied sponsor's champion Bart Taylor (played by Olympic gymnast-turned-actor, Bart Thomas). Bart's the bad guy here, who doesn't play by the rules. The film's highlights are found in the stunt-filled race sequences, where the two duel it out on their high-flying two wheelers.

Bev Wotton
as Woman Buys T-Shirt on Street
View All

Rad is a tedious exercise of endurance that has nothing to do the number of bunny hops achieved.

The whole thing reminds you more of an overanxious teacher or coach, taking a few slang words and repeating them endlessly in a doomed attempt to "relate."

The bicycle acrobatics behind the credits at the opening of Rad are so spectacular that you wonder what the movie can do to improve on them. The short answer is, nothing.

Brimming with energy, passion, and an underdog spirit... there's not a cynical note to be found in the absolutely delightful Rad!

There's no Mr. Miyagi, but you do get Ray Walston as a local bigwig who responds to Best's meddling by giving him the finger.

Needham lovingly films the BMX riders, so, if you don't mind cheese and love bikes, you'll get a lot out of the movie.

Taken as a novelty of the mid to late eighties, 1986's "Rad" is charming in its silliness and camp.

Whooshing and swirling with mad abandon, Hal Needham's teen flick is a blast of nostalgic joy.

Provides viewers with a cool reminder of better days when conflicts were settled with BMX showdowns and nothing brought two lovers closer together than an afternoon of ass sliding.

Any film calling itself Rad had best be taken with a grain of salt, regardless of its subject matter. As it happens, the subject matter of Rad constitutes probably the dorkiest storyline we've seen this year.

Conner's screen debut is inauspicious -- to put it kindly -- in the quality of both his acting and the material chosen, and someone else is obviously doing his riding.

Rad fits so snugly into Needham's oeuvre that it's unclear whether the movie is an excuse for the 8 minute BMX montage that opens Rad or he's just lazy about setting up the slobs vs. snobs beats in his 30 year-old-teenagers in high school magnum opus.

I remember this movie! Cheesy, but interesting.