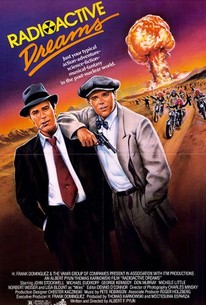 This comedy is set 15 years after the final nuclear holocaust and centers upon two fellows who have been stuck in their fathers' elaborate bomb shelter since the bombs began to fall. They had plenty of food, clothing (from the 1940s), and necessities, but their only entertainment was a huge set of pulp mystery novels by such writers as Dashiel Hammett and Raymond Chandler. By the time the two young men, Phillip and Marlowe finally emerge from the shelter in 2010, they have become "hard-boiled" detectives. They manage to find an old car and head off down the ruined roads looking for action. Along the way, they see beautiful, but hard-as-nails blonde Miles Archer and pick her up. She ends up robbing them and abandoning them. In her haste, she drops a set of keys--the keys to the last nuclear warhead. Whoever holds them, holds the world in their hands and suddenly the young men find themselves pursued by assorted weirdos, including man-eating hippies, looking for the ultimate power.

Terence McGovern
as Micky
View All

There are no critic reviews yet for Radioactive Dreams. Keep checking Rotten Tomatoes for updates!

Had possibilities, but went nowhere.