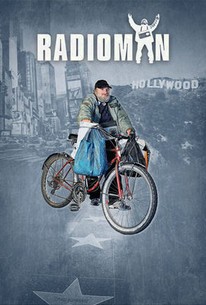 The incredible story of an extraordinary eccentric, a former homeless man whose unparalleled obsession with the movies has taken him from sleeping on the streets to becoming a New York City movie legend with over 100 small parts in films to his name. Featuring interviews with many of the celebrities who know him, the film is the rags to (no) riches story of a human being full of dreams and contradictions, and of a life full of missed opportunities and unexpected blessings. It gives the audience unparalleled access to the everyday behind the scenes of showbusiness - of paparazzi, autograph collectors, premieres and film shoots - all seen through the unlikely eyes of an old New York street bum. It's an ode to the magic of the movies - and to the power of imagination.

Kerr has given us a shrewd insight into the sentimentality and superstition of the film business, and the brittle world of movie status and prestige.

It's a pleasantly cuckoo story ...

There are moments in the film that are genuinely touching However, Kerr panders far too much to its celeb interlopers, massaging egos rather than painting a complete portrait of one of New York's more interesting inhabitants.

A fascinating, rather discomforting film.

Features a celestial line-up of talking heads, with George Clooney, Johnny Depp and Matt Damon among the interviewees.

There are no featured audience reviews yet. Click the link below to see what others say about Radioman!