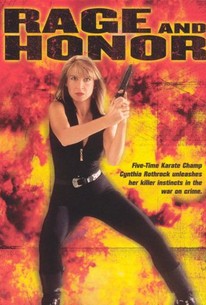 In Rage and Honor, Cynthia Rothrock is featured as a full-time high-school teacher/part-time karate instructor who's out to protect one of her students who innocently witnesses and films a mob drug transaction. He's caught and beaten but keeps the film from the bad guys. Finding and helping him is an Australian foreign-exchange cop who also gets involved in the fracas when he's set up for a murder by some cop cohorts who've gone bad.

Alex Datcher
as Hannah the Hun

Roger Yuan
as Dave the Thug

Critic Reviews for Rage and Honor

There are no critic reviews yet for Rage and Honor. Keep checking Rotten Tomatoes for updates!

Audience Reviews for Rage and Honor

Mediocre movie. The story is sloppy in parts, and the fight scenes are only so-so (and sometimes poorly shot). Cynthia Rothrock maybe a good action movie star. But it's a shame that the script fails to bring up the movie questionwise.