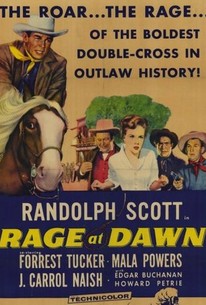 Alternative rockers Rage Against the Machine performed their final farewell shows on September 12 and 13, 2000. Having paved the way for many edgy bands in the 1990s, they also proved that pop and politics can make a heady mix. Fortunately, a camera crew was on hand to capture the band's emotional swan song. Tracks include "Bombtrack," "Bulls on Parade," "Killing in the Name" and many more.

Guy Prescott
as The Conductor

Critic Reviews for Rage at Dawn

The action scenes are carried off very well.

There are no featured reviews for Rage at Dawn at this time.