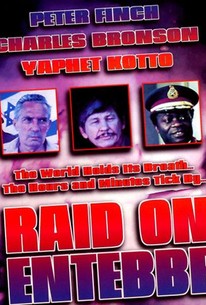 Raid on Entebbe constitutes one of two all-star made-for-TV reenactments of the Entebbe rescue of July 4, 1976. On June 27, 1976, a jet carrying an international mix of passengers is hijacked by pro-Palestinian revolutionaries. The plane lands in Entebbe, Uganda, where President-for-life Idi Amin (Yaphet Kotto) struts about feigning concern, though his sympathy toward the hijackers is obvious. Many of the passengers are released, but 103 Israelis are kept in custody, and it becomes apparent that the revolutionaries plan to use these unfortunates as a bargaining chip for the release of imprisoned terrorists throughout the world. With virtually no other option, the Israeli government gives the go-ahead for Operation Thunderbolt, a commando raid on the Entebbe airport. The cast includes Charles Bronson as General Shomron, Jack Warden as Mordecai Gur, Sylvia Sidney as ill-fated passenger Dora Bloch, and, as Prime Minister Rabin, Peter Finch, whose performance (his last) won him an Emmy nomination. Raid on Entebbe first aired on January 9, 1977.

Critic Reviews for Raid on Entebbe

There are no critic reviews yet for Raid on Entebbe. Keep checking Rotten Tomatoes for updates!

Audience Reviews for Raid on Entebbe

If this bit of history interests you then you will enjoy this. It's accurate, although Netanyahu died at the beginning of the raid. It could do with some editing. This could have been an hour long movie and been much better. Interesting subject, presented accurately, but only a fair movie.