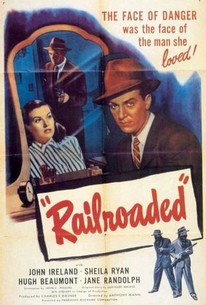 One of director Anthony Mann's earlier films, Railroaded features John Ireland as Duke Martin, a seedy criminal looking to skim off of his boss' money. Instead of making the extra cash by his usual means--a small gambling operation run by beautician Clara Cahhoun (Jane Randolph)--Duke (Ireland) chooses instead to hold up the beauty parlor at gunpoint. Things go awry, however, when the cops hear Calhoun's (Randolph) assistant scream in terror. In a spray of gunfire, both a policeman and Martin's partner in crime are killed. Meanwhile, a local delivery boy is accused of killing the police officer. Detective Mike Ferguson (Hugh Beaumont) is assigned to the case, and quickly begins to butt heads with Duke, who he realizes from the start is up to no good. ~ Tracie Cooper, Rovi

Roy Gordon
as Ainsworth
View All

Vivid film noir B movie thriller, with creative visuals and a good story.

Held together by John Ireland's nasty performance as the heartless villain without redemption.

Excellent Film Noir from Anthony Mann with an innocent man being accused of a murder/robbery and only a single police officer willing to discover the truth.

Anthony Mann's direction is the only highlight of this justifiably overlooked, but biting example of film noir. It's a little too dark (visually, that is) at times for its own good, the acting's weak and uneven and watching Ward Cleaver kiss someone is just odd. The low budget and weak script definitely hurt Railroaded but it's worth checking out if you're an Anthony Mann fan.