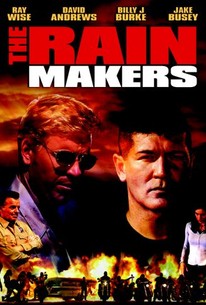 When Special Forces soldier Johnny Wing Foot returned from the Vietnam War, he thought he had seen the last of meaningless bloodshed. His dream of a peaceful, post-war life in the desert soon shattered by warring factions and a crooked sheriff's department, Johnny is forced to take up arms once again as a heated dispute erupts into all out war. Johnny isn't going to be able to rescue the preserve on his own though, and in order to get the job done he's going to need the help of his six trusted companions. Though Johnny may have sworn never to kill again, he's not above taking a stand for what's right when it seems like everyone around him has lost their perspective.

Tim Sitarz
as T-Rex
View All

Critic Reviews for The Rain Makers

There are no critic reviews yet for The Rain Makers. Keep checking Rotten Tomatoes for updates!

There are no featured reviews for The Rain Makers at this time.