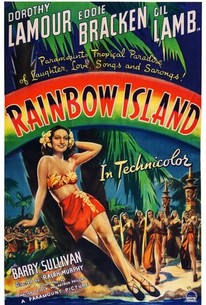 Rainbow Island is a lavish Technicolor confection designed to show off the physical attributes of star Dorothy Lamour. This time Lamour is a white girl raised as native on a tropical isle. Barry Sullivan, Eddie Bracken and Gil Lamb play merchant-marine sailors hiding from Japanese troops on Lamour's island. The storyline may have had dramatic inclinations, but these are forgotten amidst several seductive musical numbers and numerous shots of Dorothy swaying in her patented sarong. Perhaps aware that no one could have taken this film seriously, Ms. Lamour plays her role for laughs, and gets them. Rainbow Island was based on a story by silent screen star Seena Owen, the "Dorothy Lamour" of her time.

The reason why Dorothy Lamour is one of today's screen Queens. [Full review in Spanish]

There are no featured reviews for Rainbow Island at this time.