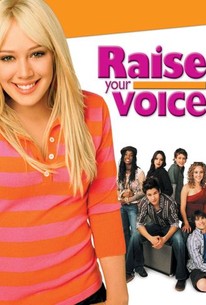 A teenage girl learns that reaching for your dreams isn't always easy in this heartfelt drama with music. Terri Fletcher (Hilary Duff) is a small-town girl with a great love of music and a fine singing voice. Already one of the lead vocalists in her church choir, Terri has also appeared at local nightspots with some help from her older brother. When he tragically dies in an auto accident, Terri becomes all the more determined to make the most of her talent, and she's elated when she's accepted as part of a summer study program at one of California's most prestigious music schools; however, Terri attends over the stern objections of her father. As she tries to hold together her relationship with her family, she finds herself falling for one of her fellow students, Jay (Oliver James), and competing for attention against dozens of kids whose talent rivals her own. Raise Your Voice also features Jason Ritter, Rebecca De Mornay, Rita Wilson, David Keith, and John Corbett.

News & Interviews for Raise Your Voice

View All Raise Your Voice News

Critic Reviews for Raise Your Voice

Made for tween girls.

10 Reasons Why You Should (Or Shouldn't) See Raise Your Voice...

This ain't Fame. It will not live forever.

I like Hilary Duff, she's very charming, but she's stuck on this after school special level with these movies.

This is for Duff's already committed audiences, which presumably consist of the young, the innocent and the commercially acquisitive.

All we can do is marvel at how the mighty -- Northern Exposure hottie John Corbett (as a weirdly flirty music teacher) and Risky Business babe Rebecca De Mornay (as Duff's frisky aunt) -- have fallen.

Vapid story, shallow concept, bad acting, unoriginal characters, and a climax so cheesy I had to shut it off to keep from kicking in the screen.

Duff carries off the lead role with confidence and grace, exuding a kind of fresh-faced naiveté not often found in other young female stars these days.

Duff's sunny disposition makes her a likable movie presence, but I've yet to see anything from her...beyond a 'let's put on a show' high school drama club enthusiasm.

In watching the anemically manipulative Raise Your Voice, one wouldn't mind calling for a touch of well-needed laryngitis.

Audience Reviews for Raise Your Voice

This is getting 5 stars purely based on Oliver James performance. Such a beautiful guy and you couldn't help but fall in love with him. The plot of the film was good and since I watched this in my early teens, I was always going to have a real soft spot for this film. The start of the film is also unexpected and a real poignant story. The songs were incredible and you can't deny the fact that Hilary Duff has an amazing singing voice.

A great movie about finding your place in the world & following your heart :)

This is a good movie. Emotional and fun to watch.

Enjoyable with a good heart, but it crumbles after every scene!