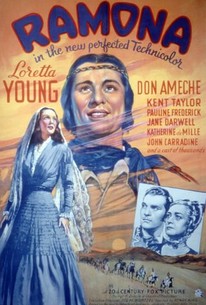 First filmed in 1910, the venerable Helen Hunt Jackson novel Ramona was remade in 1936 in full Technicolor (20th Century-Fox's first such production). Loretta Young plays Ramona, a half-Indian girl raised by a white family in Spanish California. She falls in love with the young man of the household (Kent Taylor), but her joy turns to sorrow when the matriarch of the household expresses disgust at "race-mixing." Ramona turns instead to the family's Native American servant (Don Ameche), a relationship that proves fatal for him. Ramona is rare for a 1930s film in that it depicts its racist characters as being totally in the wrong, rather than treating them compassionately so as not to offend the bigots in the audience.

J. Carroll Naish
as Juan Can

Charles B. Middleton
as American Settler

Robert Spindola
as Paquito
View All

Another Technicolor hit. Watch for the scene where Loretta Young, locked in her room, turns her head toward the window...

The best technicolor experiment so far.

There are no featured reviews for Ramona at this time.