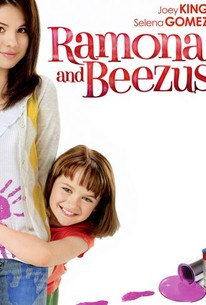 Critics Consensus: If Ramona and Beezus fails to capture the essence of its classic source material, it's sunny, sweet, and wholesome.

Critics Consensus: If Ramona and Beezus fails to capture the essence of its classic source material, it's sunny, sweet, and wholesome.

Critic Consensus: If Ramona and Beezus fails to capture the essence of its classic source material, it's sunny, sweet, and wholesome.

The adventures of young Ramona Quimby (newcomer Joey King) and her big sister Beezus (Selena Gomez) come to life in this all new film based on the best-selling books (over 30 million...and counting) by Beverly Cleary. Ramona's vivid imagination, boundless energy, and accident-prone antics keep everyone she meets on their toes. But her irrepressible sense of fun, adventure and mischief come in handy when she puts her mind to helping save her family's home. John Corbett (My Big Fat Greek Wedding) and Bridget Moynahan (I, Robot) also star as Ramona and Beezus' parents, Robert and Dorothy Quimby, while Ginnifer Goodwin (He's Just Not That Into You) portrays the girls' Aunt Bea, opposite Josh Duhamel (Transformers) as Bea's former flame, Hobart. Sandra Oh (Grey's Anatomy) plays Ramona's third grade teacher, Mrs. Meacham. Elizabeth Allen (Aquamarine) directs from a screenplay by Laurie Craig and Nick Pustay. Denise Di Novi and Alison Greenspan produce for Fox 2000 Pictures and Walden Media. The cinematographer is John Bailey, ASC; Brent Thomas is the production designer; and Jane Moran is the editor. Co-producer is Brad Van Arragon. Music is by Mark Mothersbaugh, and the music supervisor is Julia Michels. -- (C) 20th Century Fox

Lynda Boyd
as Mother (of Triplets)

Miller
as Picky Picky
View All

News & Interviews for Ramona and Beezus

View All Ramona and Beezus News

Critic Reviews for Ramona and Beezus

Only a twisted, seriously sad individual could have a problem with this sunny tween comedy, which I hated.

Despite everyone's efforts, Ramona comes across as an insufferably spoilt and attention-seeking little horror.

Nothing to frighten the horses, as they say, or interest or entertain them much, either.

Fans of the Ramona Quimby books will be disappointed, but tween girls will love it.

A film for kids trying far too hard to appeal to their parents.

Refreshingly anti-princess and sweet without degrading into sugary, Ramona and Beezus animates Ramona's frequent flights of fancy with DIY-like sequences that literalize, quite charmingly, how a kid colors the world.

In stepping back and viewing it not as a super-faithful adaptation, but as entertainment aimed primarily at young girls, there is certainly something to be celebrated here...

Just try not to smile as you watch the imaginative misfit Ramona make classic childhood mistakes in this ebullient adaptation of Beverly Cleary's timeless series.

...an affable yet forgettable little comedy...

Very entertaining and even heartbreaking in some moments...

Captures the spirit of the Beverly Cleary books and offers a Ramona who's a believable combination of mischief and innocence.

Audience Reviews for Ramona and Beezus

A really cute, completely harmless, and often amusing family movie. I wish less of the story was focused on the adult characters (the Ginnifer Goodwin and Josh Duhamel storyline almost put me to sleep) and more time was spent with the adorable Ramona (Joey King, who absolutely steals the movie) and the charming Beezus (Selena Gomez, who hopefully has a great movie career ahead of her), but honestly, there's not much about Ramona and Beezus that I didn't like. Anyone with fond memories of reading Beverly Cleary books as a kid or who wants to share the on-screen versions of the characters with their children will enjoy this. Ramona and Beezus is the rare kind of completely inoffensive family-oriented film that escapes blandess and boredom and leaves you with a grin on your face, despite all the sugary sweetness.

Deeeelightful! Funny! Charming! Sweet! Good for everyone, young and old!

A Little Sister Goes A Long Way. Very nice family film with very imaginative stuff and some real life problems everyone faces these days. Very clever story and fun for all ages. Watch it with your kids. Adapted from Beverly Cleary's perennially popular book series, Ramona and Beezus stars newcomer Joey King as Ramona Quimby, a grade-schooler with a big imagination. So big, in fact, that she often clashes with her no-nonsense teacher (Sandra Oh). When Ramona's upbeat dad (John Corbett) loses his job, the family including her teenage sister, Beezus (Selena Gomez), and their practical-minded mother (Bridget Moynahan) must make major adjustments, like dad learning how to run the house. Ramona dreams up various plans to make money so that she can save their house, but because everybody in the family seems too preoccupied to help her with her own worries, she turns to the one person who always has time for her, Aunt Bea (Ginnifer Goodwin). But even Aunt Bea is distracted these days because her ex-boyfriend and Quimby family next-door neighbor Hobart (Josh Duhamel) keeps trying to win Bea back.

I really enjoyed this movie surprisingly. It wasn't funny, cute, or cool, but it was good. The acting was made completely for kids and hollywood, but the movie IS for kids and hollywood so it didn'tbother me. The plot was very good in my opinion because it dealt with real life issues and how children percieve it. Its not a must see, but its a nice film.