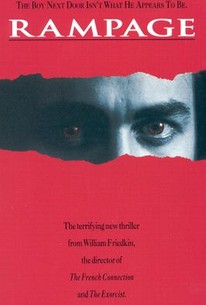 Rampage delves into the subject of legal insanity, so often the default defense in modern-time gruesome crime trials. Alex McArthur plays an outwardly normal guy who goes on incredible killing and mutilating sprees until (and even after, when he escapes for a short time) he's captured. When he comes to trial, the liberal DA (Michael Biehn) is torn between his own leftist leanings and the reality of the heinous crimes for which the accused is being tried. He must argue for the death penalty.

David A. Kimball
as Doctor in Flashbacks

Chip Heller
as Guard No. 1

Rodney Cornelius
as Guard No. 2

Charlie Holliday
as Narc No. 1

Ken Jackson
as Narc No. 2

Steven A. Jones
as 2nd Guard

Pamela Tarver
as Woman in Car

This is not a movie about murder so much as a movie about insanity -- as it applies to murder in modern American criminal courts. Friedkin plays with two decks and is happy to stack them both.

Basically, in re-editing his film to make a cruder point, Friedkin took out the shadings in his characters and the better work of his leads, and in no way whatsoever did he improve the movie. He in fact systematically made it worse.

...never gets under the skin of its protagonist or allows us to understand what he's supposed to be feeling.

The film starts off strongly enough but once it becomes about Friedkin's need to present a pro-death penalty argument in the most one sided fashion imaginable, it becomes dull and occasionally repugnant.