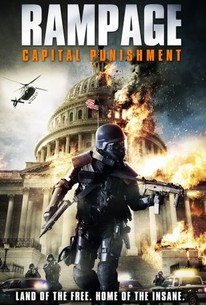 Violent anti-hero Bill Williamson has a plan to change the world by exacting vengeance on the rich, and ripping Washington apart. He holds a number of people hostage and uses his captives as his political platform to spread his message and awaken humanity. It's time to destroy the system, and change won't happen peacefully.

Bruce Blain
as The Homeless Guy

Boll doesn't manage to capture much of what made the first film so unexpectedly enjoyable. It comes off as forced, even with a couple well designed and executed sequences.

Absolutely dreadful. Whereas the first film, as fucked up as it may be, at least had a direction and a purpose of some kind, this film has nothing. No discernible message or point to it. The main character just rants about everything for like an hour and then blows up a building. It's fucking stupid. And it's not even directed at the American government, or politicians, as the film's title and description would have you believe. At least that's a purpose. The character talks like a fucking madman (what argument is being made here), and even shoots a hostage at one point because she practices yoga. Everyone knows that Uwe Boll makes awful films, but this one takes the fucking cake. What a piece of shit.

Follow-up to Uwe Boll's finest effort, Rampage, Rampage: Capital Punishment is a surprisingly disturbing decent into madness. Well crafted in order to make the viewer unsettled with every frame. Uwe Boll has had the reputation of being one of the worst directors working today due his numerous video game adaptations. However, whenever he writes his own ideas to make a film, he manages to make something watchable, and this film is quite good for a sequel, and even more impressive for the fact that it's a Boll film. I never hated Boll to be honest, I always viewed his work as so-so, and he is able to make entertaining films when he's got a great idea to work with. Rampage: Capital Punishment is a haunting psychological decent into madness, one that mixes action, thriller and horror elements into one effective, unforgettable picture, one that is sure to be a cult film among midnight movie fans. Boll manages to pull off something thoroughly engaging, a film that has some tense, thrilling, horrifying moments that just grabs your attention, and you simply cannot tear yourself away from what you watch. The film is not perfect of course, but considering that this was made by Uwe Boll, it's a good effort, and it just goes to show that he can make a competent film. The lead actor Brendan Fletcher gives a great performance as the film's villain, and with that being said, I think he deserves to get far bigger roles in bid budget films, as he is a capable actor who manages to make a role his own. Rampage: Capital Punishment won't get an y accolades anytime soon, as it is a film that unfortunately never realizes its full on potential due to budget constraints and a few weak areas, but for what it is, it's a good effort worthy seeing if you want one of the better movies from Uwe Boll.