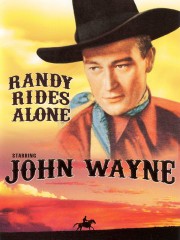 Kyle D
July 18, 2017
It was okay, it is the topical love story towards the end and not much story, but one of the first kind of undercover cop(even though he wasn't a cop) kind of movies

Randy is jailed and accused of a murder he didn't commit. Fortunately, one girl believes his story. He escapes from prison and falls into the camp of the men who committed the murder. He must convince the female who formerly believed him he has a plan to get the rightful men arrested for their crimes.

Harry L. Fraser, director of Broadway to Cheyenne, Rustler's Paradise, The Last of the Clintons, Ghost Town, Chained for Life, Jungle Terror, and Aces Wild, delivers Randy Rides Alone. The storyline for this picture is fairly cliché and straightforward. The action scenes were below average but I loved the soundtrack. John Wayne stars and is a bit rigid in this early work of his.

This was recommended to me via Fios so I randomly DVR'd this Wayne classic. This was a very cliché western with little going for it. There were the classic western elements, music, and feel, but little that differentiated this in the genre. I recommend skipping this unless you're a diehard western or Wayne fan.

"Lock her up. It will give her a chance to refresh her memory."

Don S
August 5, 2014
An early John Wayne western similar in all aspects to the others of the era: simple story with basic plot, no character development, poor acting and horribly unbelievably fight scenes. How Wayne got beyond these to become a star is beyond me.

Donald W
½ March 18, 2013
This is one of John Wayne's early B Westerns made when he was young. It's was made shortly after the invention of sound movies. After the opening credits there is no music except when there is a scene of a player piano. They still depended on the theater having a piano with a player who improvised music during chase scenes. The story is boring and unrealistic. There are a lot of scenes of people riding horses, a few fist fights then a closing gunfight at the end. These movies were meant for Saturday afternoon matinees for kids during the depression before the invention of television. The acting is very bad. But you can see John Wayne starting to get better. He is obviously better than the rest of the actors.

Zack B
½ September 6, 2010
Slightly overrated considering many consider it to be Duke's best 'B' story. It's still a decent one with an interesting plot of Wayne finding a bar full of corpses and being blamed for all of the deaths.

Jamie D
March 25, 2010
A nice early John Wayne Movie, if you can cope with the terrible acting from the other actors, you'll enjoy this. A great story that kept me hooked, Nice one!

Ben P
June 5, 2008
decent fun wayne western. The soundtrack isn't that great, could have done without it.