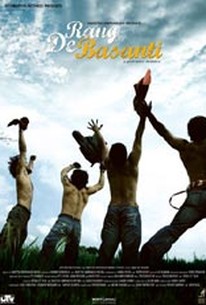 A young, London based filmmaker chances upon the diaries of her grandfather, who served in the British police force in India during the freedom struggle. Excited about these memoirs, she makes plans to shoot a film on the Indian revolutionaries mentioned in the diaries. She comes down to Delhi, and casts a group of five friends to play the pivotal roles of these revolutionaries. However, products of modern India, the five youngsters initially refuse to be part of the project, as they don't identify with these characters from the past. Not surprising, considering that they're part of a generation of Indians that believes in consumerism. To them issues like patriotism and giving one's life for one's beliefs is the stuff of stuffy text-books are made of. They would rather party than be patriots. In the film, both the 1930's British India and the India today run parallel and intersect with each other at crucial points. As the film reaches its resolution, the line between past and present blurs, as they become one in spirit.

Aamir Khan
as Daljeet AKA 'D.J.'

It was a film whose impact spilled over into real life, and led to the arrest and conviction of the politically connected killer of popular model Jessica Lal...

Accomplished and universally appealing, this is the way Bollywood films should be made.

An ambitious melding of history, politics, romance and patriotism within the parameters of a commercial Hindi movie.

The film that stirred up a generation, the Aamir Khan-led ensemble drama about getting the youth to take a stand and call out social injustice, has never been more relevant.

The performances are fantastic, and as an ensemble they compliment each other beautifully.

Already a cultural phenomenon in India, this reformist melodrama by Rakesh Omprakash Mehra (Aks) uses razor-sharp technique and an eavesdropper's ear for dialogue to update the patriotic fervor of Bollywood's golden age.

While at first it seems like a tiresome succession of nice-looking music videos, not even caring to explain how the character can make that kind of film without money, it soon gets worse with a reprehensible message, openly advocating the use of violence to change the country.