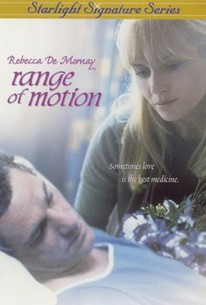 As the result of a freak accident, Jay Berman (Barclay Hope) lies comatose in a hospital bed. Despite the admonitions of friends, family members and medical experts, Jay's steadfast wife, Lainey (Rebecca De Mornay), and the couple's young daughters refuse to accept the negative prognosis that Jay will never snap out of his coma, tenaciously holding on to the faint hope that he will somehow revive before the Christmas holidays. During her long vigil in the hospital, Lainey befriends Ted Merrick (Henry Czerny), whose own wife is in an irreversible coma, and whose response to the tragedy provides a startling contrast to Lainey's unswerving faith. Meanwhile, Lainey's loyal best friend, Alice (Melanie Mayron), experiences marital strife of a different variety as she tries to keep the Berman family's spirits up. Adapted from a novel by former nurse Elizabeth Berg, the made-for-cable Range of Motion was shown over the Lifetime network on December 4, 2000.

Critic Reviews for Range of Motion

There are no critic reviews yet for Range of Motion. Keep checking Rotten Tomatoes for updates!

There are no featured reviews for Range of Motion at this time.