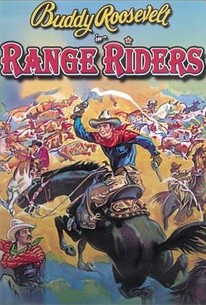 This western ranks with Edward D. Wood's infamous Plan 9 from Outer Space as the worst film of all time. The plot concerns an old rancher who sends for his son to come home and rid the ranch of a variety of frontier thugs, but it's not the story that holds your attention. What stands out about this film is the hopelessly abysmal acting of everyone concerned, plot holes you could drive a truck through, the fact that many scenes are totally out of focus (apparently the cameraman had better things to do than look through his viewfinder), and an audio track that rises and falls like a roller coaster. Buddy Roosevelt, a top western star in the silent era, made a string of these cheapjack films for Superior Pictures -- each reportedly shot in two days on a budget of $2500 -- for a salary of $250 a piece. He was overpaid.

There are no critic reviews yet for Range Riders. Keep checking Rotten Tomatoes for updates!

There are no featured reviews for Range Riders at this time.