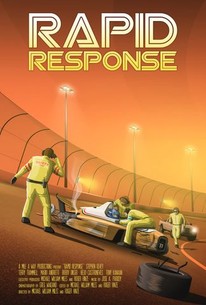 In 1966, medical student and racing fan Stephen Olvey gets the opportunity of a lifetime when he is asked to volunteer at the Indianapolis 500 on their medical team. What started as fun insider view of a sport he loved quickly devolves before his eyes as he sees the level of medical support given to the drivers, whom he has befriended, is terrifyingly non-existent. After feeling helpless at the scene of what turns out to be a fatal accident. Dr. Olvey sets off on a mission to build a team to apply science to transform motorsports from the most fatal form of sport to one of the safest. Over the next 30 years, they succeed and the science that they develop influences modern trauma medicine, the United States military, NASA, and the passenger cars we drive today. This is the true story of the most fatal era in Motorsports and the Indy 500 doctors who pioneered safety and helped the drivers to cheat death.

Rapid Response helps, in a small way, to deglamourise the dangerous thrill of the racetrack.

Its microfocus, anecdotal structure, and reliance on archive footage and talking heads, undoubtedly makes this one for the true devotees of motorsports, but they'll not want to miss it.

This sincere and workmanlike documentary about the introduction of medical assistance and safety protocols into the world of American motor racing... is initially engaging, but quickly becomes formally and fatally repetitive.

The anonymous, off-the-peg score of backing music and flat editing... make this a bit of a slog.

The film's content is interesting; its conclusion - that we're all safer thanks to these doctors and their advances in field treatment - is warily optimistic.

If you're a fan of auto racing, this is a film I highly recommend.

Shocking statistics, spectacular crashes and talking heads make up this film about the development of US motor racing safety. It's initially fascinating and sometimes jaws-dropping, though it's also repetitive and overlong.

[T]his is a tale that may as well be told.

Powerful stuff, but easily solved - don't drive at 200mph in a sardine can full of petrol.

This sobering but thrilling documentary looks at the evolution of the auto racing medical response teams that grew out of the Indianapolis Motor Speedway.

Ultimately, this documentary consists of interviews in the background and car crashes in the fore. It's the engaging content that overcomes the repetitiveness of the visuals.

There are no featured reviews for Rapid Response at this time.