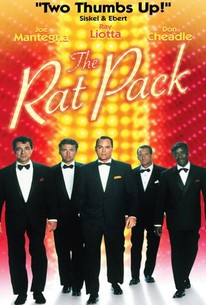 Critics Consensus: While it evokes its time period with a keen sense of swagger, The Rat Pack is troubled by uneven lead performances and fairly routine biopic trappings.

Critics Consensus: While it evokes its time period with a keen sense of swagger, The Rat Pack is troubled by uneven lead performances and fairly routine biopic trappings.

Critic Consensus: While it evokes its time period with a keen sense of swagger, The Rat Pack is troubled by uneven lead performances and fairly routine biopic trappings.

Shot in 33 days, this $9.6 million biographical drama of behind-the-scenes interactions within the Rat Pack group of Frank Sinatra (Ray Liotta), Dean Martin (Joe Mantegna), and Sammy Davis Jr. (Don Cheadle) is set against the political backdrop of the '60s, establishing links of singers, gangsters, actors, and politicans (sometimes brushing shoulders in the same rooms). The film also explores Sinatra's relationship with John F. Kennedy (William Peterson). Deciding to support Kennedy, Sinatra patches up his feud with Peter Lawford (Angus Macfadyen), since Lawford's wife, Pat (Phyllis Lyons) is JFK's sister -- and a Sinatra-Kennedy friendship soon follows. However, when Joe Kennedy (Dan O'Herlihy) decides Sinatra's nightclub, mob and commie connections are a no-no for JFK, the patriarch's interference angers Sinatra. Meanwhile, Sammy Davis Jr. enters into an interracial liaison with May Britt (Megan Dodds), and the dynamics of the situation are visualized in an imaginative musical fantasy sequence in which Davis sees himself singing and dancing for an unresponsive line of white supremacists. Broadway's Savion Glover stepped in with the film's choreography. Substitute singers featured the voice of Michael Dees for Sinatra and Mantegna duplicating Dino. Also covered here are the events that led to the filming of Ocean's Eleven (1960). For an actual Rat Pack stage performance, see The Rat Pack Captured (1965). Filmed in LA, the TV movie premiered August 22, 1998 on HBO.

Tom Dreesen
as Himself

News & Interviews for The Rat Pack

View All The Rat Pack News

Critic Reviews for The Rat Pack

This depiction of the Rat Pack, in their misogynistic, racist, mob-friendly fullness, feels rounded and human in a way that some of the most dewy-eyed remembrances of Sinatra, at the time of his death, were not.

It's a diffused, pointless, tabloid drama rendered, for the most part, in stilted, waxworks fashion.

Watching it is like having a hangover without the fun of getting happily plastered in the first place.

They researched the facts and worked on the characterizations, but the makers of "The Rat Pack" ultimately lose their way.

What's surprising is the way the deftly handled drama exposes the darkness without destroying the glamour.

The story is familiar; the actors fail to generate electricity, and the script contains some real embarrassments.

Sinatra's image is just too fresh and idiosyncratic to allow for the suspension of disbelief that The Rat Pack requires, even if Liotta had had a better handle on Sinatra's charisma than he demonstrates here.

It's not a home-run swing, but it reaches extra bases for what it has to say about a certain male swagger that's been lost and how upward mobility will take you only as far as the real powers say you can go.

[Kario] Salem's script occasionally sings poetically but too often the movie plays like a series of highlight scenes that aren't cohesively tied together.

Audience Reviews for The Rat Pack

There are no featured audience reviews yet. Click the link below to see what others say about The Rat Pack!