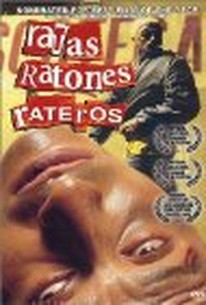 USC-educated Ecuadorean director Sebastian Cordero debuts with this gritty urban drama set in the impoverished edge of Quito. Salvado (Marco Bustos) along with his buddy Marlon (Fabricio Lalama), entertains himself with petty crimes such as stealing hubcaps. Salvado is a virginal teenager who lives with his widower father and his senile grandmother and is attracted to Carolina (Irina Lopez), the beautiful daughter of a rich family. Things change radically for Salvado with the arrival of Angel (Carlos Valencia), his cousin who is also a hardened criminal on the run from some loan sharks. Hit men eventually track Angel down, and the two are nearly killed. They flee to Carolina's bedroom while she is away attending a graduation ceremony. The violence soon follows. This film was screened at the 1999 Venice Film Festival. ~ Jonathan Crow, Rovi

There are no critic reviews yet for Ratas, Ratones, Rateros (Rodents). Keep checking Rotten Tomatoes for updates!

There are no featured reviews for Ratas, Ratones, Rateros (Rodents) at this time.