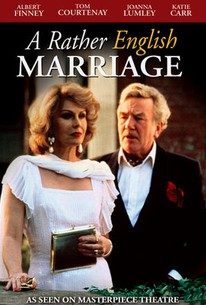 A sort of mannered, British version of The Odd Couple (1970), this drama won four of the seven major BAFTA Awards for which it was nominated. Albert Finney stars as Reggie Cunningham-Jarvis, a former Royal Air Force squadron leader who is utterly debilitated by the death of his wife, allowing his estate to decay. At the suggestion of a social worker, Reggie is paired with Roy Southgate (Tom Courtenay), a retired milkman, orderly homebody, and fellow recent widower. Roy moves in and begins caring for Reggie's manor, and an unlikely friendship between the two men develops, although Reggie treats Roy more as a servant than a roommate. Their relationship becomes tested, however, with the arrival of Lizzie Franks (Joanna Lumley), a shop owner hoping to seduce Reggie for his riches. ~ Karl Williams, Rovi

Critic Reviews for A Rather English Marriage

There are no critic reviews yet for A Rather English Marriage. Keep checking Rotten Tomatoes for updates!

Audience Reviews for A Rather English Marriage

(1998 Director: Paul Seed) If you have ever losted a loved one, someone quite dear &near, you will likely feel rather at home watcing this movie. Two rather extraordinary love stories & lengthy marriages so both men are somewhat misplaced after their wives' deaths, which happen within minutesof each other--and at the same hospital! They quite naturally connect. The kinder of the two men attends the other's wife's funeral and invites former RAF Squadron Leader Reggie Conynham-Jervis (Albert FInney) to attend hiis wife's funeral. A lively senior citizen's social worker comes out to visit both men. Both men are retired. Roy Southgate (Tom Courtenay) who has a child in prison.also served in the Royal Air Force as a fighter pilot. Reggie aka "Squadron Leader" as most refer to him, well his wife was quite wealthy. At the reading of her Last Will and Testament, however, it comes as something of a shock ***SPOILER ALERT!! DON'T READ ON IF YOU SO CHOOSE** when her estate valued at 721,000 pounds in stock and their house of equal value she had NOT bequeathed to Reggie. HIS wife bequeathed only 10,000 pounds per year...donating her lovely home to become an orphanage upon her spouse's death. Overall Reggie is clearly in shock, and having a bit of trouble grasping the reality of the situation. [More review to follow]

A Rather English Marriage Quotes