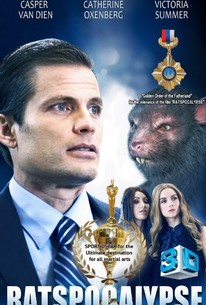 The hero of the film is an American senator named John Perryman, a man of pure and humble soul and a warrior's disposition, who delivers a fiery speech in Moscow about the country's main evil - corruption. He says that he was ordered to do so from above and threatens everyone with the loss of their human form, which draws only guffaws and resentment from the people. Many take John for a madman, and ultimately all his friends and relatives turn away from him. He meets a girl in the streets, who in essence becomes his guardian angel. The central intrigue of the film is that everything the hero talked about in Moscow begins to come true, triggering panic in Russia and across the world. To the people in power it seems that the hero commands some monstrous force unknown to science. The film is full of unexpected moments and plot twists both curious and amusing.

There are no critic reviews yet for Ratpocalypse (Higher Mission). Keep checking Rotten Tomatoes for updates!