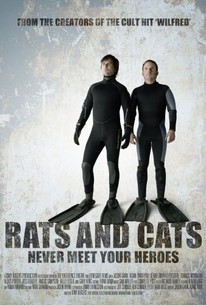 A man who crosses paths with a has-been TV star gets taken on a wild ride in this comedy from director Tony Rogers. For years, Darren McWarren (Jason Gann) was one of the biggest stars in Australian television and he seemed like a shoo-in for a successful career in the movies. But when the tabloid press learned that McWarren was having an affair with a (much) younger female co-star, he became the center of a scandal that sent his rising star crashing to the ground. Ben (Adam Zwar) is a writer for an entertainment magazine who was a big fan of McWarren during his time in the spotlight, and he's assigned to write a piece about the disgraced star for a "Where Are They Now?" issue. Ben discovers McWarren is living in a middle-of-nowhere town in Western Victoria where he spends his days driving his girlfriend, a "massage therapist," to sessions with her various clients when he isn't busy getting in bar fights and making time with other women. Ben is fascinated with McWarren, who has settled into a life where he can seemingly get away with almost anything, but the actor clearly hasn't come to terms with the fact he's not likely to make a comeback anytime soon. Written by leading men Gann and Zwar, Rats and Cats was an official selection at the 2009 South by Southwest Film Festival. ~ Mark Deming, Rovi

Critic Reviews for Rats and Cats

A hip comedy, and as such, being hip and caustic is sometimes more important than being funny.

Rats and Cats is an excellent example of independent Australian film and deserves to be seen; with a little more care in the development of the story it might have been outstanding.

Rats and Cats is a sort-of comedy, very laid-back and meandering, and it's mostly content to explore life in this little town and some of its inhabitants.

It has all the cringe-making laughs one might expect from a comedy of celebrity, but Rats And Cats also achieves a surprising subtlety by approaching its larger-than-life protagonist in disarmingly low-key fashion.

Not a lot happens in it really. But it's the way it doesn't happen that counts.

There are no side-splitting jokes as such, but a high number of humorous observations that are right on the money.

Audience Reviews for Rats and Cats

This was definitely a "sort-of-comedy" - one that relied on humorous observations rather than outright jokes (which doesn't exactly do it for me). Since some of the comedic dialogue was underscored with dramatic music, I didn't even know what to feel sometimes. The film also lacked somewhat in the story department - it was pretty laid-back, and while this seemed to work initially, the absence of any stronger narrative progression eventually left me bored. For me, Paul Denny (the spitting image of a young Dennis Hopper) was the stand-out performer.